An Apple a Day…

Ever wondered if there is any truth in that old saying “an apple a day keeps the doctor away”? 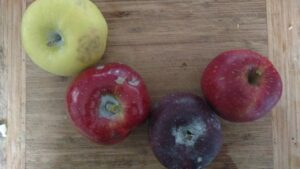 Turns out, there is!

In 2015 The Journal of the American Medical Association published a study looking to see if apple consumption was associated with fewer doctor’s visits.  While the study did not find a decrease in doctor’s visits in those who reported that they regularly consumed apples, it did find a significant decrease in prescription medication use in apple consumers.

While apple consumption may not be a panacea, it may be a delicious way to improve your health.  Consuming apples have been shown to be beneficial for lowering cholesterol, decreasing inflammation, promoting weight loss, promoting optimal digestive function, protective against lung and colon cancer, and lowering asthma risk.

The health benefits of apples are thought to be due to the presence a high number of antioxidant compounds along with the fiber and pectin content.  Many of the antioxidants in apples are found in highest concentrations in the skins, so for greatest benefit, do not peel them.

According to the Environmental Working Group, apples are among the 12 foods with the highest pesticide residues on them. Because of this, organic or minimally treated apples are best for individuals wanting to avoid pesticide associated health risks.  The skin contains the highest concentration of pesticide residue, so if left with no other option, peel nonorganic varieties.

There are many ways to enjoy apples, from eating them fresh off the tree, to making apple sauce, and apple pie.  Below is a recipe for a wheat free Caramelized Apple Pancake. Enjoy!

Davis MA, Bynum JP, Sirovich BE. Association between apple consumption and physician visits: appealing the conventional wisdom that an apple a day keeps the doctor away. JAMA Intern Med. 2015;175(5):777-783.

Preheat oven to 500.  In a medium bowl, combine milk, egg, 1 tbsp. maple syrup, and 1 tbsp. oil.  Add in flour, baking soda, and salt.  Stir until combined.  Heat a cast iron or other oven proof skillet over medium high heat. Add 1 tbsp. oil.  Put apples in pan in single layer.  Allow to cook 4 minutes or until they begin to brown. Carefully flip apples and continue to cook until browned on second side.  Add 2 Tbsp. maple syrup, cinnamon, and walnuts.  Toss to just coat apples. Remove from heat. Using a pastry brush or piece of paper towel, coat sides of pan with oil.  Pour in batter.  Put in oven on middle rack. Reduce oven to 425 and cook for 12 minutes or until top is beginning to brown and the pancake is cooked. Slice into wedges and serve.